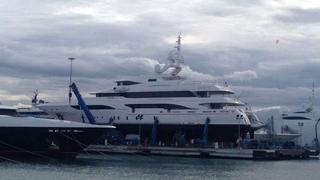 The latest launch in Benetti's custom line, the new 60m Benetti superyacht FB255 was sold by Fraser in May 2012 to an Asian client. The five-deck, steel-hull yacht has 10.6-metre beam and an ample 1,060GT volume. Her layout includes a private owner's deck, and Formosa accommodates 12 guests in six staterooms, looked after by 15 crew members.

Exterior design and naval architecture is by Benetti's in-house team, while interior design comes from Sinot Exclusive Yacht Design in The Netherlands. Special amenities include an elevator, Jacuzzi, stabilisers and a helipad.

Fraser's Jan-Jaap Minnema reported that the Letter of Intent for the new order was signed the day after the Hainan boat show. "We modified and re-written the technical specs, substantially changed the General Arrangements, decided the interior styling and negotiated the contract,' he said back when the deal was signed. "This all in just over 30 days. It is typical for the Asian style of business: extremely efficient and fast!"

Benetti launched its 58-metresuperyacht Illusion I August 2014 and its 50-metre Vica, FB801, was launched last month. Next up, Benetti will deliver its 62-metre hull No FB264.