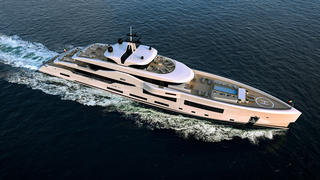 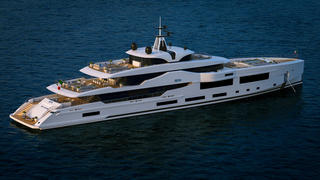 The 65 metre Benetti superyacht project B214 has been announced today (September 28) at the Monaco Yacht Show as part of the Italian yard’s new semi-custom range Benetti Now.

Construction on B214 will begin before the end of the year at Benetti's Livorno facility, with British studio Redman Whiteley Dixon signed on to create a range of haute couture interior options.

Exterior designer Stefano Natucci said: “This is a winning design because it represents the perfect answer to current market needs. The style is clean and straightforward. I always work to obtain compactness, flowing lines and the right distribution of volumes.”

The tri-deck B214 features a superyacht swimming pool and a helipad on the foredeck. Moving up to the sundeck and owners will be able to choose between al fresco relaxation fore and aft or enjoying sheltered views from the amidships skylounge.

Further details are yet to be disclosed, with total guest and crew accommodation still unclear, but B214 is one of four models in the Benetti Now range. Next to be built in Livorno is the 50 metre B164, which will feature a total interior volume of just under 500 gross tonnes. The 58.6 metre B192 and 73 metre B240 will complete this semi-custom range.

The Italian yard added that this semi-custom approach means that owners will be able to own a unique yacht in a reduced construction time.

Commenting on the project, Redman Whiteley Dixon said: "The concept of delivering any of the four models with a very short build time, but with the ability to offer fully bespoke interiors to the client's absolute and individual requirements, led to the great creativity, organisation and scale of the Redman Whiteley Dixon studio becoming the natural partners for this ground-breaking range of large yachts."

Other large superyacht projects currently under development at Benetti include its first two yachts over 100 metres, FB277 and FB279, which are due to launch in 2019 and 2020 respectively.