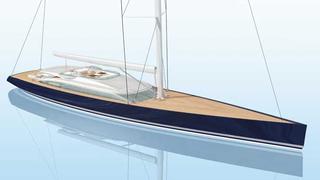 Briand designs sloop and ketch based on superyacht Vertigo

‘I believe above 50m the sailing boat should have two decks, and possibly a flybridge,’ says Briand. ‘This kind of boat is quite successful and we launched one of the largest ones, Vertigo, last year. Now we’d like to show what we can propose in the lower end of the 50m-plus size category.’

‘We kept most of the design features, like all the lines of the two superstructures are extrapolated from what we did on Vertigo, so they have the same DNA.’

Like Vertigo, both the 170 Flybridge Sloop (51.8m) and the 174 Flybridge Ketch (53m) have sleek, uncluttered profiles, with long foredecks and relatively low flybridges, plus storage for two tenders out of sight, below deck.

Briand feels it is not practical to build a sloop longer than 52m if it is to adhere to the Panamax rule, which limits the air draught of boats that pass through the Panama Canal to 62.5m – the sail power would not be adequate for the size of the yacht. Therefore for his 174 design he opted for a ketch, which has two masts.

Both designs have generous sail plans and almost vertical bows, giving them long waterlines that increase speed under both sail and engine power. Along with their low-drag hulls, these features will allow the 170 to reach an estimated speed of 18 knots under sail, and the 174, 20 knots.

The 170 features a saloon on the main deck, while the owners’ cabin is aft on the lower deck with direct access to the lazarette and swimming platform. There are another four guest cabins and forward there is accommodation for eight crewmembers. Wrap-around windows that can be fully opened and transparent sides to the superstructure mean the yachts’ interiors will be exceptionally light and airy.

The aft cockpit is protected by a large hard top with an opening louvre system and sliding windows. The flybridge is open but can be sheltered by a removable Bimini top and large dodger screen.

The 174, which accommodates 10 crew, has a similar layout to the 170, although the ketch masts hold some extra benefits.

‘When you change from sloop to ketch there is some impact on the dimension of the deck saloon,’ says Briand. ‘Because it is aft of the main mast, you have some extra space on the deck saloon on the ketch.’