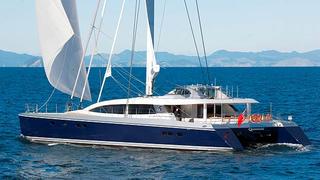 Quintessential, also known as Q5, the 30.48m catamaran sailing yacht (hull YD66) whose construction we have followed, has now been delivered by Yachting Developments in New Zealand.

Marine Construction Management (MCM) which represented the owner through the build will be providing full ongoing management of the yacht.

Designed by Warwick Yacht Design and built in composite Quintessential has spacious accommodation thanks to a beam of 14.63 metres with a layout that includes five cabins for 10 guests and quarters for a crew of six. Yachting Developments has provided a preview of her teak interior, which shows a modern design by Redman Whiteley Dixon.

Designed for spacious indoor/outdoor living the main saloon connects with the aft cockpit and features a double-sided bar. There is satellite television and broadband throughout the yacht including a fully reticulated film and music distribution system controlled by iPads.

Above the saloon the fully-enclosed bridge is equipped with state-of-the-art sailing instruments, navigation electronics and communications systems.

During Quintessential's successful sea trials in Hauraki Gulf, Auckland, her twin 455hp Caterpillar engines produced a top speed of 14 knots and a cruising speed of between 12 and 10 knots. She also reached 9 knots with only one engine - useful for extensive cruising. Under sail her Southern Spars carbon mast and Doyle Sails were also tested, with the catamaran reaching 14 knots in just 12 knots of true wind speed.

Quintessential was delivered to her owners only three weeks after launch and made her maiden voyage to Fiji, covering 1300 nautical miles in five days, exceeding her owner's expectations and prompting him to comment to MCM’s Peter Wilson, 'This is ridiculously nice!'