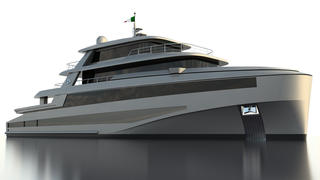 Italian yard Cerri Cantieri Navali has announced a 42.5 metre explorer yacht project called Commander. Due to be launched in late 2017, this five-deck yacht was developed in collaboration with yacht management company Floating Life and boasts a total interior volume of 498GT.

Revealed earlier this week at the Cannes Yachting Festival, Commander features an open aft deck inspired by some of the world's best superyacht support vessels, which can be used to carry a 10 metre tender or be converted into a sunbathing space.

Mauro Sculli, who created the modern and aggressive exterior lines, said: “The design is a compromise between different types of yachts; mainly an explorer and a traditional, modern craft, combined with the wish to include elements that would immediately and clearly reflect Cerri Cantieri Navali’s distinctive style.”

Moving inside, the main saloon measures 80 square metres and features sliding glass doors that can open this sheltered space up to the elements. The light Mediterranean décor features a colour palette inspired by the Greek islands. The owner’s deck measures 100 square metres and comes with its own private spa pool as well as his and hers ensuites. A second superyacht spa pool is situated on the aft deck upper and provides seamless views out to sea.

Guest accommodation is for a total of 12, with two twin rooms, a bunk cabin and two VIP suites that each gets its own fold-out terrace. Meanwhile, the spacious crew quarters are situated in the bow. Commander also features a spacious beach club with fold-out sections on both sides. This area is connected to the aft deck via a spiral staircase.

Built on the same platform as the Fuoriserie K40, Commander features a bulbous bow for improved seakeeping and efficiency underway, while the light-ice class steel hull further enhances the explorer yacht connection. Power comes from a pair of CAT C32 engines for a top speed of 15 knots and a maximum cruising range of 5,400 miles at 12 knots.

Diego Deprati, CEO of Cerri Cantieri Navali, added: “This yacht stands out for a number of modern, innovative solutions and I am confident it will be welcomed by the market just as it deserves."