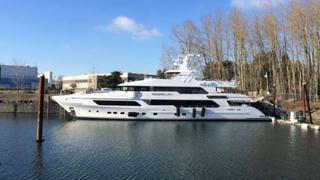 Christensen Shipyards has announced the launch of Missing Link, the first in its 43 metre Custom Series.

[Christensen signed the contract the new custom 43 metre series superyacht](www.boatinternational.com/2012/03/19/christensen-signs-contract-for-new-custom-43m-series-superyacht/) in March 2012. It was a deal brokered by Tom George of Tom George Yacht Group between the Vancouver yard and a US client.

“We are excited to see Missing Link sitting in the water perfectly on its lines as designed", says Christensen CEO Joe Foggio. "The hull is flawless in its finish and really strikes the attention of anyone who sees it. We are appreciative of the owners who chose Christensen to build with.”

The interior, designed by Carol Williamson and Associates, has five staterooms, a full beam skylounge and an elevator through all the decks including the sun deck. Missing Link also has a helicopter touch-and-go facility. Within the nine metre beam, the boat boasts a capacious interior. The interior design features satin finished walnut cabinetry, accented by dark high gloss furniture and inlay stone floors. Notable within the design is the use of space and large windows, bringing natural light into the interior and showing off the dark gloss to its full effect. The dining table can seat 10 people.

Outdoor spaces are also integral to the guest experience on Missing Link, with three decks and a large sundeck up top, with plenty of room for sunloungers, despite having to make room for the heli-pad. A crew of eight will look after the guests on board.

She is powered by twin MTU 12V 4000 diesel engines, which Christensen predict would give her a 16-knot top speed and a range of 3,500 nautical miles. Classified and certified to ABS Commercial Yachting Services classification & MCA-LY2 Large Commercial Yacht Code Compliant, Missing Link is due to undergo sea trials and commissioning in time for a February delivery.