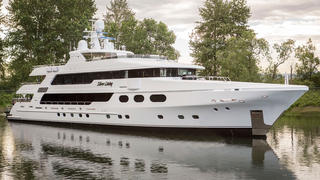 US boatbuilder Christensen Shipyards has launched a 50 metre superyacht called Silver Lining, which is its first launch since a 2015 buyout. The new arrival was ordered by a repeat Christensen customer.

Christensen added that a second 50 metre yacht, Chasseur will be launched later this week, with both models due to be delivered to their owners in July before going on display at the Fort Lauderdale Boat Show in November. Two additional 50 metre yachts are under construction at the American facility, with a planned 2018 delivery date.

The yard added that the new models were launched using a new system called the Luken Launcher after the company's chairman Henry Luken, who came up with the idea.

The US yard, based in Vancouver, Washington, was sold in July 2015 to co-owner Henry Luken, securing the jobs of the 105 staff. The deal included everything from the yard’s machinery to company trademarks.

Luken's involvement with Christensen goes back to 2003 and since then, with his partners, he has overseen the creation of the Custom Series line and the delivery of 13 yachts.

Luken said in April 2016 that he is proud that so many of the yard's senior employees have returned under his ownership. The workforce boasts over 1,000 man-years of experience between the team.

“We’re boatbuilders," he said. "That’s what we love to do. The goal of our new company is to streamline every aspect of the building process to support the people who build the boats and those who buy the boats we build. We want our customers to have as much enjoyment during the process of construction as the exceptional artisans who create them.”