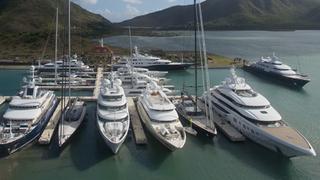 St Kitts’ Christophe Harbour has launched six new superyacht berths and claimed it is now the only marina in the Caribbean capable of accommodating 106 metre – 122 metre yachts.

The six new berths, which are offered for sale from $6.25 million to $7 million, sit alongside the marina’s other 24 berths for yachts measuring 45 metres to 65 metres.

“These freehold berths are a direct response to requests from superyacht owners and captains for berths to accommodate larger vessels,” he said.

Darby added: “There are not that many places where a superyacht of this size can go and safely dock whatever the weather in the Caribbean. With the launch of these new berths, Christophe Harbour is the only marina in the region able to welcome yachts up to 122 metres in an enclosed harbour.”

Christopher Harbour officially opened in 2015 and is located on the southeastern Peninsula of St Kitts.