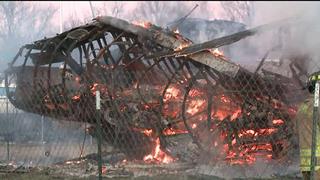 The classic 1953 Feadship Notorious, previously owned by US President Gerald Ford and Randolph Hearst, has been destroyed in a fire.

The owner was in the midst of major repairs when the fire started at 5am on 21 January and investigators are yet to find the cause of the blaze. According to news outlet WHNT based in North Alabama, USA, the owner was looking for a marina in which to base the yacht at the time. Nobody was aboard or hurt in the fire.

The 78ft motor yacht, which was used by Charlton Heston while he was filming Planet of the Apes and reportedly also owned by a mafia boss at one time, was being stored ashore in Huntsville, Alabama. It's the end of the road for the handsome yacht, which enjoyed a rich history but was also almost lost in August last year.

Notorious had been sitting on a mooring at Ditton Landing in South Huntsville when locals reported it partially sunk. The owner was apparently out of the country and nobody was on board. Rescue crews found it difficult to raise the ship and it was several days before she was hauled onto dry land by a crane. Initially divers had pumped water and fuel out of the boat and had used air bags to raise her partially out of the water.

Previously Notorious was known as Serano II and Exuberance. Website www.boneyardboats.com has been tracking Notorious for some years and carries this eye-witness report on her demise, “Unfortunately, there was obvious damage to the hull on the starboard side near the stern where the weight of the boat rested on the lifting sling. There's a crushed spot in the hull probably at least 18" across and at least as tall. The damage could extend below the waterline - couldn't really tell. The hull didn't show any sign of buckling as a previous owner apparently feared, and it seemed like the keel was holding the weight, so maybe the only damage was to the side.

“What caused it to sink is anyone's guess at this point. Maybe the damaged spot in the hull was already weak and had given way prior to being lifted. That's the only hole I saw in the hull, but as I said the hull was still partly afloat and not completely visible.”