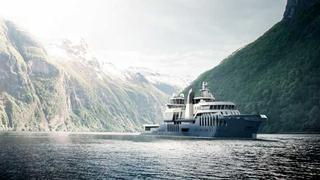 Yacht designer Claydon Reeves is currently running an exhibition of its superyacht designs in the London office of Fraser Yachts.

'The aim is to showcase a cross section of the different things we can do,' says design partner Mike Reeves. Three yacht concepts are being exhibited, which demonstrate the design studio's capabilities - both exterior and interior - for vessels from 15m to 110m.

All the yachts have 'signature Claydon Reeves features', namely concave surfacing above a crisply defined two-line sheerline. 'Our philosophy is to keep things simple,' says Reeves, 'and that means connecting the bow and stern with the fewest number of lines.' And it is no coincidence that the Claydon Reeves style is redolent of automotive design, given Reeve's background as a car designer.

This design signature is seen in the hull of the 70m Caspian superyacht, which has a strong, distinct lines. Its interior follows a familiar layout in some ways, but spaces have been carefully reconsidered resulting in a volume that equates to a 90m yacht. Most notable is the massive full-beam master cabin located on the main deck, which has floor-to-ceiling windows and comes with a huge dressing room complete with its own skylight. Complementing the owner's accommodation are four spacious guest cabins.

Other features include a touch-and-go helipad and a 7m swimming pool on the aft main deck, which bisects the rear transom door, its glass wall jutting out when the door is open to create a true infinity pool with spectacular views for swimmers.

The second superyacht design is Cosmos, an explorer yacht concept that was initially conceived as a conversion of an anchor-handling vessel that would be refitted by a commercial shipyard. However, as the design evolved it made more sense to start it from scratch as a new build so that no compromises would be necessary. It will now be a fully fared boat, built on a more traditional hull form by a major Turkish superyacht builder, but will retain something of its work boat aesthetic.

Coming in two different sizes, 70m or 75m, the yacht is ruggedly styled - with an angular structure reminiscent of Sir Norman Foster's Izanami - and designed to carry all manner of toys and equipment, from jet skis and sailing dinghies to two 10m tenders and a Sikorski S-76 helicopter, housed in a fully enclosed hanger below main deck along with a submarine that will be launched off the stern.

Divers will have the rare option of being able to swim directly from the bottom of the yacht's hull through a ‘moon pool’ avoiding exposure to the outside environment - a feature more commonly seen on diving support vessels for the offshore oil industry.

In addition to a spa pool on the sun deck, the 75m version of the yacht will have a massive indoor/outdoor pool in the middle of the main deck that can be closed off from the elements by means of sliding glass walls and folding doors. The saloon, built over the forward half the pool, will have glass segments in its floor through which the pool will be visible, as well as 270-degree views from its own vast windows.

Space has also been rethought on this yacht, which is endowed with an unusually high 3m headroom, but much thought has also gone into the way people use yachts, so, for example sofas are reconfigurable to allow guests to sit in more intimate groupings as they wish, rather than being dictated to by a more formal arrangement.

'It is a Swiss army knife of a yacht,' says Reeves, 'with many layers of functionality.'

The 70m Cosmos yacht is being marketed by Fraser Yachts, offering a delivery date of 2015.

Also on show is the 15m Aeroboat, a very unusual launch whose design takes its inspiration from the Spitfire aircraft and the Rolls Royce engine that power it as well as the Schneider Trophy float planes, classic hydro plane race boats and classic car design.