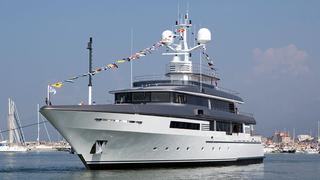 Codecasa was the star of the Monaco Yacht Show 2011 with the presentation of its first 42 metre motor yacht in the new Vintage series.

Meanwhile in Viareggio, hull C 116 hit the water without public fanfare, and the Italian yard has only now released more details about this new yacht, which has been christened Aldabra. With a length of 51 metres, she is the latest in the successful Codecasa 51 series. Square windows, a vertical wheehouse, and white and silver paintwork give her a distinctly modern look.

Lloyd's registered and MCA compliant, Aldabra is built in steel and aluminum to a design developed by the in-house architects. Her layout accommodates 12 guests in a full-beam master and VIP cabin on the main deck, and four lower deck guest cabins - two doubles and two twins.

With her sea trials due to start soon Aldabra will be delivered before the end of the year.