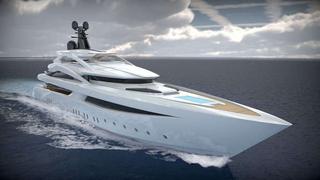 Columbus Yachts, part of the Palumbo Group, has announced that its Columbus Oceanic 70 metre superyacht is being built on spec.

The Italian builder revealed the designs for Columbus Oceanic 70m superyacht at the 2014 Monaco Yacht Show, and the build process began shortly afterwards.

In a recent project update, Palumbo Group described the Oceanic 70m as “one of the largest yachts in the world to be built on speculation”.

Developed in collaboration with Studio Vafiadis with naval architecture from Hydro Tec, the build is currently on schedule at Palumbo's shipyard in Naples.

One focal point on the new Columbus Oceanic 70m will be its beach club and spa, set on the lower deck aft with direct access to the water via an enormous swim platform. Her modern flowing lines will incorporate a sizeable foredeck swimming pool.

Guests will be accommodated in six cabins, including the master located forward on the main deck and the VIP stateroom on the upper deck, which doubles up as a smaller master cabin.

Giuseppe Palumbo, CEO of Palumbo Group, said of the new 70m: “The Columbus Oceanic 70m will represent an additional line, a forward-oriented, fresh and dynamic, cutting-edge stylistic approach to propose to new clients.”

Like with other Columbus Yachts, environmental impact was an important consideration in the design of the new project. “The 70m is designed to have the hybrid propulsion option among many other environmentally friendly features,” Palmubo added.

As a result, the Oceanic 70m will be capable of a maximum cruising range of 5,000 nautical miles at 11 knots and a top speed of 18 knots.