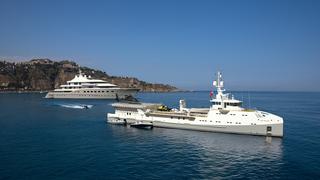 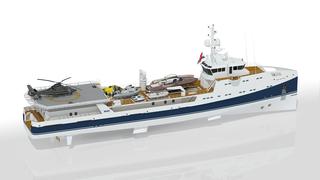 Damen's largest ever yacht support vessel, the 69 metre Sea Axe 6911, has been launched and christened Intrepid.

The Sea Axe range is built in cooperation between Amels and its parent company Damen. The Sea Axe 6911 is an evolution of the current flagship, the 67.15 metre Sea Axe 6711, of which two are launched, including Garcon.

Modeled after Damen’s high-speed patrol and offshore support vessels, the Sea Axe range is the ultimate superyacht toy box, designed to shadow the mothership and carry everything from helicopters to boats and submarines to extra staff.

According to Amels, client feedback inspired the Sea Axe 6911. “The owner’s team came to us with a lot of client-specific customisations for what was then our 67-metre platform,” says Damen product director Mark Vermeulen. “They put a lot of thought into how the owner would like to operate the yacht support vessel in combination with the mother yacht… Now we’ve put a lot of that client feedback into the updated design – the Sea Axe 6911.”

The new Sea Axe 6911 also boasts a helicopter workshop, dive centre, 110 square metres of storage below decks and 250 square metres of deck space for tenders and toys. There are accommodations for 22 crew or staff.

Amels reports a second is in build on spec.