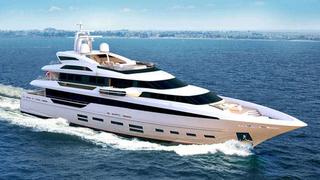 Combining the talents of superyacht designers Patrick Knowles Designs for the interior and Dutch designer Cor D Rover for the exterior, the project is four-deck yacht to be built in carbon fibre. Danish Yachts, of Skagen, Denmark, has mastered the material and has built a whole range of performance luxury yachts (one of the latest, the award-winning AeroCruiser 38II superyacht Shooting Star, resides at Bradford Marine’s facility in Fort Lauderdale, Florida) to SWATH vessels for the offshore industry in carbon fibre and epoxy.

The advantages are clear, in terms of fuel efficiency and low maintenance, said Danish Yachts CEO Patrick von Sydow. While this is still considered a luxurious material, the cost of carbon has come down by 70 per cent since the 1980s. On average, fuel saving is about 20 per cent over more conventional materials such as aluminum, according to surveys the yard has conducted, in addition to lower maintenance costs thanks to carbon fibre’s strength and stiffness.

'When you look at the running cost per year, are very much in favor of carbon vessels,' von Sydow said. The project’s aim is to meet three basic mandates: be efficient, attractive and functional.

As the president of a service yard, Bradford’s Paul Engle sees yachts that run the gamut in terms of use, including ones that are out of service for months while complex repairs are made.

'The American yacht owner is a real yacht user. They get out there on the water for extended periods. Many spend weeks if not months living and traveling on their yachts. So their comfort is very much tied up in their confidence in their yacht’s capability and that of the team they can call on for support,' Engle said. 'What we are talking about today is the future of yachting.'

The new project shares several characteristics with the existing Danish Yachts’ range—the construction material and method and attention to design details among others. However, unlike the high-speed AeroCruiser range, which Danish Yachts has developed further with designer Espen Øino (including a flybridge version that Bradford will market in the U.S.), the QuadraDeck the partners unveiled in Palm Beach is designed to reach around 20 knots.

Wrapped in what Cor D Rover calls a 'modern jacket' is a five-cabin yacht for 10 guests with the feel of an apartment on the water. At the master suite’s level (par of what can be an owner’s deck) is a balcony, which can be opened and used while the yacht in underway. The sun deck features an enticing design with its convertible that expands by 40 per cent thanks to terraces that unfold from the central mast, an evolution from the Sky Terrace concept Cor D Rover introduced a couple of years ago.

The tender garage located forward and benefiting from full headroom, leaves space aft for the stern beach area owners all want today. The pilothouse and adjacent captain cabin is located a few steps down from the master suite, independent of the guest accommodations.

As far as interior décor, it will be left to the client’s imagination and desires. Knowles, whose firm has created 126 projects in the marine, aviation and residential sectors to date, believes in designing what the clients want.

'From an interior design perspective, I believe success lies in finding a balance between the fashionable elements of the Scandinavian philosophy and satisfying the American perception of luxury,' he says. 'Remembering that first and foremost we are here to offer inspiration. It’s up to our clients how far we exploit any given influence.'

Power options will also be left to the client to decide, according to Cor D Rover, although for the moment the team is leaning toward conventional twin screws and proven diesel engines rather than more exotic options such as diesel-electric or other systems.