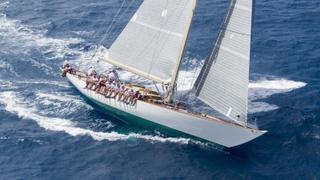 Tofias, a well-known owner and lifelong sailor, will now head up the company from its new headquarters in Newport, Rhode Island which Tofias described as “the yachting capital of the world.”

The company also has offices in Greenwich, Connecticut, which were its former headquarters, and Fort Lauderdale in Florida.

Over the past 30 years, Tofias himself has owned a number of boats from the boards of designers including Waldo Howland, W. Starling Burgess and Ray Hunt. He has also owned W-Class Racing Yachts for the last 20 years. The company's W.76 sloops will now be marketed by Sparkman & Stephens.

As president, Tofias said he will strive to “preserve the history” of Sparkman & Stephens while “building and expanding on its great tradition in yacht design and brokerage.”

The company, which was founded in 1929 by Olin Stephens and Drake Sparkman, works on the design and engineering on vessels spanning commercial, military and pleasure use.