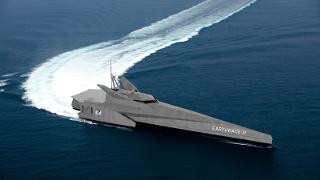 Marine conservation organisation Earthrace has revealed plans for a new 60 metre trimaran, which is being developed under the project name Earthrace 2.

The radical new design by Auckland Naval Architects LOMOcean Design is based on the original Earthrace trimaran Ady Gil, which currently holds the record for fastest circumnavigation of the world by a powerboat.

Pete Bethune, CEO of Earthrace, said: “We’ve worked in a number of countries now targeting illegal fishing by foreign vessels, but the real work in open waters has been limited because we lacked our own long-range vessel.

Earthrace 2 would have a maximum cruising range of 10,000 nautical miles and a top speed of more than 20 knots. Her Sealegs amphibious tender would allow for quick deployment of troops onto remote beaches.

The layout can accommodate a grand total of 26 people, and the vessel is designed to run continuously at sea for up to 28 days.

To fund the final designs of Earthrace 2, the conservancy will be setting up a Kickstarter campaign to raise $50,000.

Several yards are being considered as build partners, including an Indonesian facility that specialises in composite military vessels. Construction is expected to begin before the end of the year.