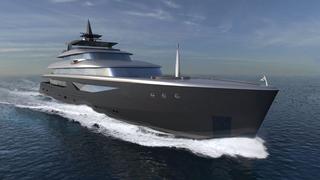 The concept, called Adamantine, features superyacht features facetted, diamond-like windows and a powerful, masculine-looking hull with smooth planes and gentle chines and a slightly downward-angled bow. Throughout the superstructure, Adamantine’s windows are shaped and angled to form a continuous chain of faceted glass.

‘The diamond shaped windows is my idea, which I observed many years ago from the deck of a boat during one sunrise departure from a port,’ says Erdevicki, ‘looking at the buildings on a shoreline, windows reflecting and sparkling in early sunrise. I wanted to incorporate the idea into a yacht design and here, many years later, was an opportunity to do so.’

If a client takes up the project, Nobiskrug is keen to build the yacht at its Rendsburg facility, where a 74m and a 100m-plus project are currently underway. ‘The design is something innovative,’ says Susanne Wiegand, joint managing director of the yard. ‘The way it uses light as the yacht’s image builder contrasting with the minimalist lines of the powerful hull, both well-suited to our construction technology.’

Erdevicki proposes the use of a reflective glass that would emphasise the jewel-like effect of the window facets, rather than typical dark tinted windows, while inside he believes Lalique glass or Swarovski crystal would compliment the exterior effect. The construction method itself would involve ‘proven methods of sealing glass joints’ and weight issues could be somewhat mitigated by choosing a lighter-weight modern glass, such as laminated bulletproof glass.

Interior decor and the details of the layout have been left for a potential owner to choose, but Adamantine’s current plan takes advantage of the natural light and panoramic views that the extensive glass provides. The owner’s suite is arranged over two decks, including a panoramic private lounge on the upper deck reached by a spiral staircase from the main deck cabin. The lounge offers fantastic views and direct access to the private forward deck.