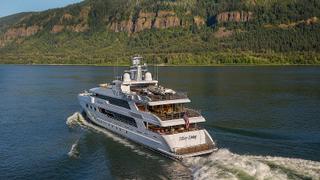 EU's 25% levy on US imports clarified by ECPY

The European Committee for Professional Yachting (ECPY) has provided further details on how the EU’s additional duty of 25% will affect US built charter yachts in EU waters.

The defiant measures were first adopted by the European Commission in June 2018, in response to US enforced tariffs on steel and aluminium. The measures were said to affect “all sea going boats and yachts, with or without auxiliary motor, for pleasure or sports” imported from the US.

It was feared the measures would hit the charter market hard, however, meetings between the ECPY and French customs earlier this month have clarified how these measures will affect US-built yachts in the EU charter market.

It is now known that the additional tax will not apply to commercially registered US-built yachts formally imported into the EU before June 22 last year. These yachts will also be exempt from paying the 25% custom tax upon their return to Europe should they be re-imported at a later date.

However, the ECPY found that the tax will apply to US-built yachts not formally imported before June 22 last year. Despite this, the yachts will be able to operate under the Temporary Admission exemption, but only for private use. Even so, the ECPY warned that not all EU countries will accept this admission. The ECPY is still awaiting clarification regarding the use of chase boats during a charter and will provide further details at the end of the month.

The news follows the warning from US yards that American shipbuilding had been rocked by the additional taxation first announced in June 2018. Nicole Vasilaros, senior VP of government relations and legal affairs at the National Marine Manufacturers Association (NMMA), previously told Boat International the trade dispute between the US and EU had led to cancelled orders at US shipyards. The “significant” 25% duty increase made the European market “basically unmarketable” for US shipbuilders, she said.

“It’s impossible to absorb that cost - there are other boat builders that can fill up that gap and we’ve heard from manufacturers that they’re having orders cancelled,” she said. “For many US builders between 10% and 30% of their business is exports. This is definitely causing an impact.”

While most builders were able to avoid the cancellation of orders, Vasilaros voiced concern that affected builders would soon be forced to make job cuts. “You can’t go on having orders cancelled and not sustain a hit in your workforce,” she warned.

While recognising the “enormous” 25% levy, president of US-based shipyard Christensen Jim Gilbert said no prospective client had mentioned the tariffs. He suggested the true effect of the trade war between the EU and the US would be felt in “market deterioration”.

“I can hear our competitors in Europe using the prospective tariffs as a way of discouraging their clients from looking across the pond for a boat,” he said. However, he described yacht owners as “savvy folks” who do not scare easily.

“I think many buyers who are thinking over the two to three-year term of construction would assume, as I am assuming right now, that this is a lot of strutting and chest-puffing and ultimately will not take place.”

He added, “There is simply too much for the US to lose in any trade war, especially with important, friendly European nations.” This was echoed by Vasilaros who said she hoped for a “quick resolution”.

However, the NMMA joined the International Council of Marine Industry Association and the European Boating Industry to call on President Trump to end the escalating trade dispute. In a letter addressed to President Trump, the presidents of all three organisations said the dispute had “effectively frozen the export market” and led to “marine dealers in the EU and Canada to cancel orders of US built boats.”

The letter continued, “Without a solution that immediately withdraws these tariffs or exempts key allies, the marine industry – and the global economy – will suffer.”