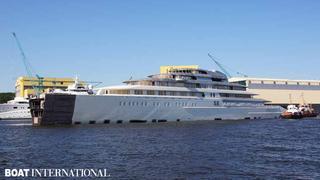 Wrapped in shrouds of secrecy, the giant project underway at Lürssen was a source of speculation and rumour until the extraordinary hull — minus her bow — appeared from the Lürssen shed in Bremen on 24 May.

While official channels remain closed due to the strict confidentiality agreements surrounding the project, we can exclusively reveal that the exterior design of the vessel — codenamed Project Azzam — comes from the boards of Italian design house Nauta Yacht Design. We uncovered the information through our trusted sources, and today we received confirmation from Nauta Yachts of their involvement. In a short statement, Nauta’s Mario Pedol told us:

‘We are pleased to inform you that the 180 metre motor yacht recently revealed at Lürssen Shipyard is our exterior design, from the waterline to the top of the mast.’

Also included in the statement is confirmation that the project is indeed 180m, which makes Project Azzam a staggering 17.5m longer than Roman Abramovich’s Eclipse, currently the largest yacht in the world at 162.5m.

However, it is possible that the Gross Tonnage – a measure of the enclosed volume of the yacht – could be less than that of Eclipse or the second largest yacht, the 162m Dubai, due to Project Azzam seemingly being designed to offer great performance. We believe that the yacht’s four large stern tunnels (shown below) point to jet drives. We understand from our sources that she has been designed to achieve a staggering 30 knots, although this has not been officially confirmed.

The latest pictures we received (see below) suggest that the bow section has now been attached to the rest of the hull, with the top part of the bow visible sticking out of her new shed – offering a tantalising glimpse of what she will look like when completed. We also have it on good authority that completion is set for the end of 2013 – a rapid build for such a large superyacht.