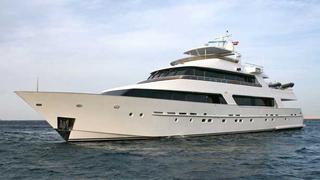 An extensive refit undertaken on the 38m semi-displacement Heesen motor yacht No Comment has been completed.

The refit was executed by FM Yachts (Frank Mulder Yacht Projects BV) with interior redesign by Mulder Design, which had been responsible for the original design of the 1986-built yacht - one of their first large motor yacht designs. Structural work was carried out in Pula, Croatia and the interior fit-out and finishing was done at Marina Hannibal in Monfalcone, Italy.

Launched as Tropic C, the yacht went on to have four owners over a period of 25 years. She was known as Morgan Star when her fifth owner bought her in 2009 and renamed her No Comment. With the yacht still in her original condition both inside and out, her new owner decided to embark upon a refit that would transform her profile and interior.

In the course of the refit, the yacht's American-style stern with a fishing cockpit and an enclosed aft deck were completely altered, giving her a more classic stern.

The fishing cockpit was removed, making room for a comfortable aft deck with a large seating area, while the aft deck was extended on the bridge deck to accommodate two RIBs of 6.7m and 5.2m in length. The flybridge area was also enlarged and the control station removed, creating a large area for relaxation and sunbathing with a bar, sunbeds, spa pool and grill.

Inside, the interior lay-out was completely redesigned with new decor and styling by Joachim Kinder. *No Comment * accommodates 10 guests in a master suite, VIP and three guest cabins, and guest areas include a saloon and dining room on the main deck, and upper saloon and office on the bridge deck.

For the crew of eight there are three cabins and a crew mess below deck, while the captain's cabin is located adjacent to the bridge.

No Comment has an aluminium hull and superstructure and is powered by twin Deutz TBD616 V16 engines, giving her a top speed of 18 knots and a cruising speed of 15 knots. ABS classed, she has a range of 3,000 nautical miles at 12 knots.

Representing the owner, Mulder Design commented, 'The refit was completed in December 2011 and No Comment is a brand new classic, ready for another 25 years of sailing the oceans.' No Comment has now been delivered to her owner who plans to cruise her.