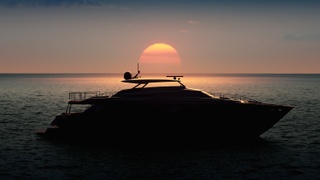 The new flagship of the brand, the 30.48 metre carbon fibre superyacht features exterior design by Filippo Salvetti. The interior meanwhile has been penned by IdeaeItalia.

Introducing the new model at a press conference at Boot Dusseldorf, Ferretti Group chief operating officer Stefano de Vivo claimed the yacht will be the “biggest 100 foot boat on the market”.

“It will be even bigger than the Riva Corsaro, which is the largest in volume on the market,” he said.

The use of carbon fibre will be integral in ensuring the Ferretti Yachts 1000 will “sail well”, he said.

“As we go bigger in volume, weight goes up and stability goes down,” he explained. “We can’t afford that because we have always built boats that sail well. The only way to achieve these kinds of sizes is to use more carbon fibre.”

He added that the use of carbon fibre had also resulted in reduced fuel consumption. “Because you’re lighter, you go faster with less fuel,” he said.

“We are upping our game, especially in carbon fibre,” he added.

Other key features of the new model include a “revolutionary stern” that will “change the way our owners use the stern of the boat”, he said.

“Ferretti is filling a gap in the market with this model,” he said.