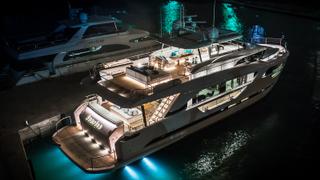 The fifth hull in the Horizon FD85 series of fast displacement yachts has been launched for a repeat European client and named Sunrise.

Sold in February 2017 and due for delivery in time for the Mediterranean summer season, this 26.07 metre yacht features interior and exterior styling by Dutch designer Cor D Rover.

The range has proved highly popular so far with the first Horizon FD85 making its public debut at the 2016 Taiwan International Boat Show. Since then, the Horizon Yachts team has sold models to clients from Japan, the USA and Europe.

John Lu, CEO of Horizon Yachts, said: “Our yachts are developed with an emphasis on innovation in response to market research to ensure we exceed the needs of all owners.”

Sunrise features several customisations to take advantage of the FD85’s 7.08 metre beam and 158GT interior. These include a five-cabin layout with an owner's cabin, two VIP rooms below decks and two further cabins that will be customised to suit the owner’s grandchildren. Meanwhile, the compact crew quarters is suitable for a two-person staff.

Other modifications include the superyacht sundeck, which will feature a larger bar area, more seating and a custom hardtop that can be adjusted to allow for more sunbathing space when needed. Power will come from a pair of 1,200hp MAN V8 engines for a top speed of 18 knots and a cruising speed of 16 knots.

Forthcoming projects from the Taiwanese yard include a new 35 metre member of the Horizon custom collection, which is due for delivery before the end of the year.