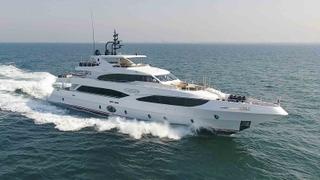 Gulf Craft has announced the delivery of the fifth model in its Majesty 125 yacht series, the 38.6 metre Bliss.

This all-GRP yacht was built to Bureau Veritas Pleasure standards for a client from the Persian Gulf and the handover was completed earlier this week (October 31).

Bliss follows in the wake of 2010 launch Grenadines III and Marina Wonder, which splashed in 2012, but as the image above shows, the exterior styling has been significantly updated since then.

Erwin Bamps, CEO of Gulf Craft, said: “Understanding how the internal and exterior areas will be used is absolutely crucial to each project’s success. A sense of spaciousness is a hallmark of our design.” This can be seen in the choice of nine separate spaces for casual al fresco dining, as well as Bliss’s total interior volume of 290GT.

Accommodation is for up to 14 guests, all of whom can enjoy a meal in the main dining area. Key features include a spacious master suite complete with its own superyacht spa pool.

The interior décor is suitably lavish for a yacht of this size, with abalone surfaces and ebony, white oak and maple woodwork, illuminated by Savage and Cantalupi lighting. Bliss is also a truly high-tech yacht, with a state-of-the-art Bang & Olufsen smart home audiovisual system and Wi-Fi connectivity throughout.

Power comes from a pair of 2,600hp MTU engines for a top speed of 22 knots and comfortable cruising at 17 knots. When trimmed back to her economical speed of 12 knots, Bliss will boast a range of 3,000 nautical miles.

Other superyacht projects currently under development at the UAE-based yard include the flagship Majesty 175 yacht, which is due to launch in summer 2019.