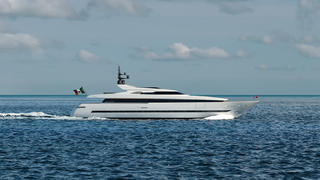 The first hull in the Akhir 42S series of semi-displacement superyachts has been sold to a Japanese owner, Cantieri di Pisa has announced.

Due for delivery by spring 2018, the new 42 metre all-aluminium yacht was styled inside and out by Luca Dini Design, the Italian yard added.

The project was first announced at the 2015 Monaco Yacht Show, with Dini explaining how the Akhir 42S preserves the Cantieri di Pisa design DNA.

Key examples of this include the smoked glass windows and portholes, as well as the signature shark nose bow design. New features on board the first Akhir 42S include a sky lounge – a first for the Akhir range.

Cantieri di Pisa added that the layout will include a full beam main deck owner’s cabin. Back aft, the superyacht beach club features a rotating transom door, which can create a balcony opening up to the sea.

Accommodation is for ten guests across five cabins, with space for a crew of six. The yard added that the first Akhir 42S will have a 8.1 metre beam for a total interior volume of around 330 gross tonnes.

Other projects under development at Cantieri di Pisa include the 36.13 metre Hull 691, which is due to launch before the end of the year.