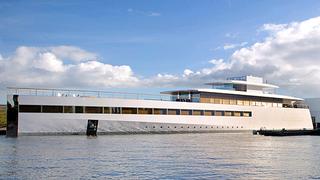 A 78 metre aluminum yacht engineered by De Voogt Naval Architects with styling by Philippe Starck was christened Venus on Sunday, October 28th at Feadship's De Vries yard in Aalsmeer, Holland when she floated out of the building hall for completing.

The christening followed a private party with the workers and the owner inside the drydock on Saturday. Although the yacht is widely purported to be the vessel begun by the late American Apple founder Steve Jobs, Feadship’s management has steadfastly declined to comment on the project. Rumours of her amazing use of glass are now borne out.

Construction began in 2009 and the false top deck hiding her communication and television receivers is noted in the new book by Boat International Media, Megayachts 2013.