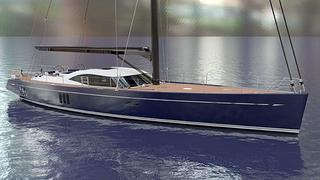 Oyster Marine announces another good news to conclude the year. A fourth hull of their new Oyster 885 sailing yacht series was ordered just before the end of 2012.

As a reminder, the first hull of the new Oyster 885 series was launched in 2012. Called Lush, this 27.08 metre composite sailing yacht is designed by Humphreys Yacht Design.

The fourth hull will differ slightly from her sisters. Her raised saloon, with a custom layout, will be nearly a foot higher than the other three Oyster 885’s.

The Oyster 885 is available in two versions, with three or two cabins: a full-beam master and two double cabins aft, or a possible extra double cabin forward. The crew quarters are forward, with two cabins for four members.