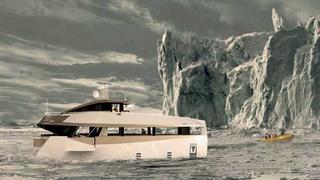 Research into future trends and values formed the basis of an explorer design by Austrian studio Motion Code Blue.

The 19m Serion Explorer E60 concept is a response to research into the mindsets of luxury consumers, carried out in by Benjamin Julian Toth as a diploma thesis at the FH Joanneum University of Applied Sciences in Graz, Austria. The design studio acted as cooperation partner and sponsor of the project. The research showed that these consumers now place the highest value on authenticity, enjoyment and experience, as well as independence, social responsibility and sustainability.

‘Future yachts owners will pay less attention to representing their wealth with a yacht,’ says Christian Gumpold, Motion Code Blue managing director. ‘They will use it as a “high class tool” to consume their own understanding of luxury, which can be freedom, aloneness, time, space, independence.’

This is reflected in the designers’ decision to pen an explorer yacht – a boat type synonymous with independence, exploration and new experiences, as well as offering environmental benefits through fuel efficiency.

While it looks more like a luxury yacht than a traditional explorer, the exterior of the E60 is a response to future clients’ simpler aesthetic tastes.

‘The yacht has a clear and straight design, there is none of the over-styling you find on many yachts these days,’ says Gumpold. ‘The “sports car on water” design will be no sales argument to future target groups and yacht owners.’

With long journeys in mind, the main deck has been stretched to the bow, where it connects with the main superstructure, increasing living space. Retractable panoramic windows can transform this deck to a supremely airy space. Similarly, the glass roof of the sky cabin can be slid back for nights under the stars.