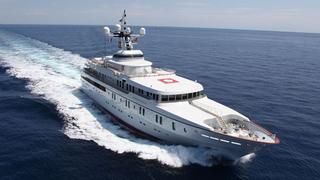 A research team from The University of Texas at Austin has successfully used a device to trick a superyacht’s GPS into changing its course (known as ‘spoofing’), revealing a potential danger to boats.

Assistant professor Todd Humphreys and his team of graduate students custom made a briefcase-sized GPS spoofing device (below) to pre-empt likely developments in the criminal world: ‘We have to play the role of the bad guys to understand their limitations and how to catch them,’ says Humphreys.

An experiment was then carried out about 30 miles off the coast of Italy after Captain Andrew Schofield invited Humphreys and his team aboard the 65m motor yacht White Rose of Drachs to test their equipment.

The team targeted the yacht’s GPS receiver and fooled it into tracking false signals created by their device. The ‘attackers’ then modified the signals to cause the yacht’s receiver to register its position as somewhere other than its true location, causing the autopilot or the officer of the deck to correct the ship’s position.

In the research report, Humphreys notes that the ship actually turned and the crew could feel it, but the chart display continued to show progress along a fixed line. Current GPS receivers cannot detect such attacks and indeed the experiment was carried out without setting off sensors or alarms.

‘I can’t really imagine any benign applications of this technology,’ says Humphreys. ‘You are able to surreptitiously move a boat off its intended course. The instruments on the bridge, if it’s done subtly enough, would not raise any alarm, and given enough time you could be tens of kilometres away.’

Humphreys believes the threat is only a potential one at the moment, since the university team’s hardware and software was custom made, and he knows of no one else who has such technology. In the time it takes criminals to catch up, it is likely that GPS systems will have developed to meet them.

‘We hope that within five years there will be technology people can buy off the shelf. My students and I are working on such solutions and research universities across the globe are also doing so. The hope is that we can fix this,’ he says.

The most promising solution in development makes use of more than one GPS antenna and compares the signals to determine what direction they came from. You would expect them to arrive from different points across the sky – if they’re coming from the same direction it means they are probably sent by a spoofer. In the meantime, Humphreys advises crews to pay close attention to all instruments, not just the GPS.

Schofield will be part of a press conference at the International Hydrographic Organization on 26 September at the 2013 Monaco Yacht Show to discuss more on spoofing.