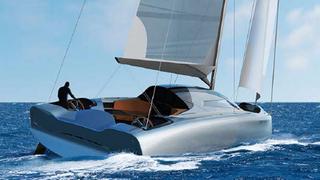 An international team of top marine industry names has launched a ground-breaking concept for a high performance sailing superyacht to break the round-the-world sailing record.

The concept features a flying keel that lifts clear of the water, a wave-piercing bow and hydrodynamic hull steps to reduce resistance. A prototype, the SpeedDream 27, has proved successful in on-the-water testing.

Led by Russian designer Vlad Murnikov, the prototype has now been scaled up to create the SpeedDream 70, in collaboration with Porsche Design Team in Austria. This radical design has already attracted interest from a potential customer for hull number one. Ultimately the team aim to build a bigger brother to the 70, the SpeedDream 100, a no-holds-barred monohull designed for offshore racing and record-breaking, including the round-the-world sailing record. There are two high performance superyachts on the drawing boards as well, the 150ft MegaDream and the 180ft high performance schooner mxAmerica.

The sail plan on the 70 is powerful but easily handled by a small crew, underlining the team’s hope that the SpeedDream concept will influence cruising yacht and superyacht design in years to come. Her canting keel is operated with a flick of the wrist, adding power to the low-drag hull and translating into cruising speeds of 25 knots or more. Canting keels have been around for more than a decade on top racing yachts, but where most keels usually cant to just 45 degrees, the keel on SpeedDream can swing to as much as 80 degrees. The stepped hull idea is taken from the powerboat world, where a lateral step in the hull acts to separate the drag into two smaller regions. As the team progresses, a canting mast and lifting foil will be brought into the design to increase performance still further.

“This is a very important step for us,” said SpeedDream lead designer Vlad Murnikov. “We proved with our first prototype that the concept of a light, easily driven hull with a wave piercing bow and flying keel really does work. Now it’s time to take these innovations and apply them to a larger offshore prototype. As the boat size increases so does the complexity.

“It’s always been my goal to expand our design team to include other talented designers to test and improve my ideas. I am very happy that Mike continues to play an important role in the project and that Merf Owen and the Finot-Conq Group have also joined us. They have designed some of the fastest boats on the water today.”

Mike Golding said, “Having sailed SpeedDream 27, I was comfortable with the overall design concept and could then bring my single-handing and offshore experience to the table to incorporate my ideas right into the new design.”

Merfyn Owen said, “It’s not easy to come up with something so original and ground breaking in an industry already crowded with brilliant designers, so when I first saw a boat with a flying keel and slender, easily driven hull I was more than a little intrigued. It’s clear that the concept works and may be on the cusp of changing the way we all think about designing fast boats.”

The round-the-world sailing record is 45 days, 13 hours, 42 minutes and 53 seconds, held by Loick Peyron and his crew on Banque Populaire V, who averaged 19.2 knots, coming home in January 2012.