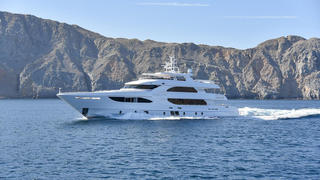 The recent Dubai International Boat Show has proved to be a huge success for UAE boatbuilder Gulf Craft, with the yard finalising the direct sale of the eighth Majesty 135 yacht on the opening day (February 28).

Mahmoud Itani from Gulf Craft told Boat International: “We have been discussing this particular superyacht with [the client] since the Monaco Yacht Show and when he saw the latest model completed at the Dubai show, he signed an order for a new one.”

Styled inside and out by the Gulf Craft team, the Majesty 135 features all GRP construction and an 8.14 metre beam, which allows for a total interior volume of 320GT.

Accommodation is for 10 guests in five cabins, while the crew quarters allow for a staff of up to 16 people. Optional extras include fold-out superyacht balconies and a Jacuzzi, but Gulf Craft has not revealed the exact specification of the eigthh yacht.

Likewise, the engine installation is yet to be confirmed, but if previous models in this range are anything to go by then a top speed of 23-25 knots is to be expected. Delivery is scheduled for spring 2018.

Other superyacht projects currently under development at the Emirati yard include the Majesty 100 series, which was given its public debut at last week’s Dubai show.