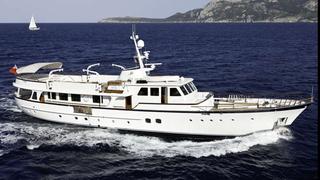 Heavenly Daze back at Pendennis for further refit works

The 32m motor yacht Heavenly Daze is back at Pendennis, having visited the Falmouth yard for an extensive refit and interior redesign (by Wetzels Brown Partners) in 2011. Since then Pendennis has continued to look after the yacht in the Mediterranean through their Palma Refit facility in Mallorca.

The classically styled yacht visited Pendennis Palma initially in 2012 and is now at the facility in Mallorca for a second time. During this visit Heavenly Daze has undergone a RINA and MCA survey. The Pendennis team are supporting the on-board engineer to complete systems servicing and upgrades. The yacht will be re-launched imminently, with the project due to be completed end of March.

Built by Feadship and launched in 1972, Heavenly Daze sleeps nine guests in a master suite, VIP cabin and two twin cabins, one with a Pullman berth.