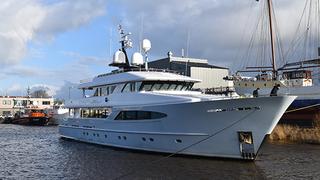 The 37.7 metre Heesen motor yacht Unexpected (ex-AlumerciA) has arrived at Balk Shipyard for a refit, it has been announced. The unspecified work will see her prepared for a worldwide cruise, starting in summer 2018.

Sold earlier this month, the all-aluminium yacht is spending her second period at Balk, after a 2009 upgrade under her first owners. Likewise, the current owner has previous experience working with the Urk-based yard, having completed a refit on the 46.48 metre explorer yacht Pioneer (ex-Turmoil) in 2007.

First launched by Heesen Yachts in 2000, Unexpected features exterior styling by Omega Architects and naval architecture by the Vripack studio. Accommodation is for up to eight guests split between four cabins, including a master suite, a double cabin and two twin rooms, while the crew quarters allows for a staff of up to eight people.

Power comes from a pair of 480hp Caterpillar 3406E-DITA diesel engines for a top speed of 13.5 knots and comfortable cruising at 12 knots. When trimmed back to her economic speed of 11 knots, Unexpected boasts a transatlantic range of 5,500 nautical miles, drawing on a total fuel capacity of 54,000 litres — a feature that should come in handy during her forthcoming global adventures.