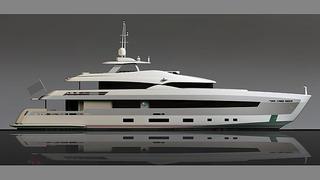 May is usually a month for new orders, and this, the second today, is one for Heesen Yachts, which has sold its first 42.4 metre Fast Displacement motor yacht.

This yacht is to be built in steel and aluminium to an ABS classification, and will be the first to be equipped with the Hull Vane®, which consists of a foil fitted below the hull to reduce water resistance by 18% at an average speed and 24% at top speed. Created by Van Oossanen Naval Architects, this innovation also reduces the motion and acceleration of the yacht in heavy seas due to the damping effect of the foil.

Currently known by its hull number 17042, the motor yacht has an exterior design by Omega Architects. Its profile is modern, low on the water, with large windows on outside. The interior, also designed by Omega, will accommodate 12 guests in six cabins including two masters: one on the upper deck aft with a gymnasium, and one on the main deck forward with a starboard side balcony. The other guest cabins will be on the lower deck: two doubles and two twins.

The Heesen 17042 will be powered by twin 1,080kW MTU engines giving a top speed of 15.9 knots, while only a total of 480kW will be necessary to reach the cruising speed of 12 knots. At this speed, the range expected is 4,000 nautical miles.

The Heesen 17042 will be delivered in 2014, but the Dutch yard will be presenting the project at the next Monaco Yacht Show.