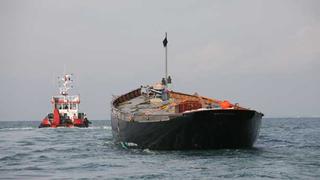 Scott Ward of the Britannia Trust tells me with great excitement that the sailing yacht Britannia arrived at her home port of Cowes at the weekend, having been towed all the way from from Son in Norway by the tug Svendborg Bugser A/S.

'They have done a great job and are the best tug company that we could have chosen to bring the Britannia to Cowes...it is so exciting to see everything come together this week! We still need financial support to finish the interiors, but we are going one step at a time.'

A replica of the original yacht that was build in 1893 for the then Prince of Wales HRH Albert Edward, Britannia is due to be lifted into a cradle at the Southboats Yard in Venture Quays, Cowes, where the final stages of her build will take place.

The rebirth of Britannia has been long awaited, and we at Boat International have watched her yo-yo between yards, first in Russia and then Norway, but now she has arrived home safely under the guardianship of the Britannia Trust which aims to recapture the glory of her predecessor as authentically as possible.

The history of the original Britannia

Albert Edward, Prince of Wales commissioned Scottish designer George Lennox Watson to design the 37m gaff-rigged cutter Britannia in 1892 after seeing his handiwork in the form of Kaiser Wilhelm II's racing cutter Thistle. Designed to the 'Length and Sail Area Rule' Britannia was built alongside the Prince of Wales' America's Cup challenger Valkyrie II at the D&W Henderson Yard on the River Clyde, and was launched on 20 April 1893, a week ahead of Valkyrie II. During her long yachting and racing career Britannia served both the Prince of Wales - later Edward VII - and his son, King George V, distinguishing herself with line honours in many races - winning a total of 231 and taking another 129 flags.

King George V refitted Britannia for racing in 1920, effectively reviving 'Big Class' racing which had been in a lull for some time. Despite being the oldest yacht in the circuit, Britannia remained a successful racer with regular updates to her rig. In 1931, she was converted to the J Class with a Bermuda rig and her last race was at Cowes in 1935.

On King George V's instruction that she was to follow him to the grave, Britannia was stripped of her spars and fittings and her hull was towed out to St Catherine’s Deep near the Isle of Wight, where she was scuppered on 10 July 1936. This marked the end of big yacht racing in Europe, after which the smaller and more affordable International Rule 12-Metre Class began to gain popularity.

The role of the Britannia Trust

In 1994, the only exact replica of 'The King’s Yacht' Britannia was commissioned (after due royal approval by HM the Queen) and built in Russia, but after many problems and hard negotiations with her Russian shipbuilders, was finally released to her then owner, Mr Sigurd Coates, who duly shipped her to Norway in 2009. The project then came to a standstill, until now.

Britannia and the reconstruction project have been acquired by Minicast Holdings Ltd, Gibraltar, which, upon its completion, will be donating the use of the yacht for a minimum of 10 years to the Britannia Trust to be a flagship for charity. The extraordinary story behind Britannia is expected to be a great draw, making her an ideal focus for charitable causes.

Reconstruction of the Britannia replica yacht

The hull and deck of the replica yacht Britannia are sound, but the interior needs to be completely refitted, and the engines and generators replaced. The estimated cost for the refitting of these items is projected to be about £1.5 million, and an amount of £2.3 million has been budgeted for the completion of the full reconstruction process. The reconstruction team has already approached a number of companies to assist in sponsoring the capital amount required, and is confident that the reconstruction work can be completed within budget and on time.

Mr Giuseppe Longo has agreed to project manage Britannia’s reconstruction process. He has been at the helm of the internationally acclaimed restoration of the yacht Lulworth, and has won a number of awards for his outstanding work in this field. He will oversee and supervise the entire process from start to finish.

Stefano Faggioni of Studio Faggioni Yacht Design has been charged with the task of recreating the original interior of Britannia in the replica yacht. It will have the same 'old world' look and feel, but will be equipped with full modern amenities. The existing interior will have to be completely stripped down before the painstaking process of refitting the yacht to the exact specifications of her predecessor can begin.

The entire reconstruction process - from docking in the dry-docks to the final unveiling of the restored product - will be documented for posterity via film and digital media, and a webcam will stream live video from the dockyard so that her build progress can be followed from anywhere in the world. This will ultimately be edited into a time-lapse video of her remake from start to finish, which will serve as a visual record of history in the making, and a picture timeline will be hung up in the completed Britannia.