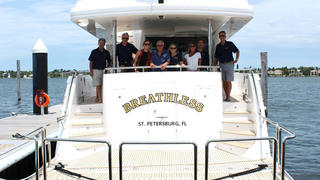 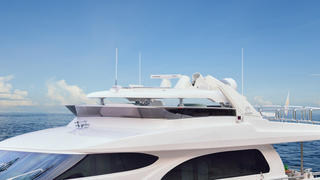 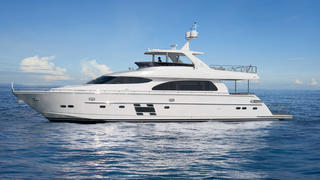 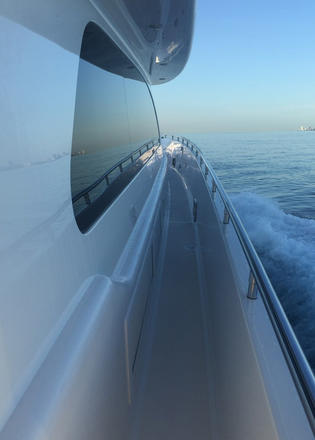 The latest model in the Horizon E78 motor yacht range has been delivered to Florida and named Breathless.

Launched in May 2016, this 23.93 metre luxury yacht was designed by Horizon Yachts' in-house team and built in Taiwan for an owner who plans to use her to cruise the Gulf Coast.

The accommodation on Breathless comprises three en-suite staterooms for six guests, plus a separate two-person crew quarters situated aft of the twin 1,600hp CAT C32 engines. Horizon Yachts USA added that she will have a top speed of 25 knots.

Other key features on board include a foredeck seating area, zero-speed stabilisation system to ensure a peaceful night’s sleep at anchor, and bow and stern thrusters for greater manoeuvrability in busy marinas.

Upper deck tender storage is provided via davit crane, and the aft bathing platform can be hydraulically lowered into the water to provide easy access for swimming and water sports.

Revealed in May 2015, the Horizon E78 includes a folding radar arch and a hard-top shade that can be hydraulically lowered at the touch of a button to reduce the air draught by more than 2.2 metres — important for clearing low bridges.

Take a closer look at the Horizon E78's lowering hardtop

Speaking about this innovative feature earlier this year, Roger Sowerbutts, director of Horizon Yacht USA, said: “Many who boat up north in the summer, specifically in the Great Lakes area, are restricted in their cruising locations and in the size of yacht they can enjoy due to fixed bridge heights. This hydraulic hard top was our answer to that problem.”

Upcoming projects under development at the Taiwan-based yard include the first Horizon E98 motor yacht, Do It Now, which is due to launch in early 2017.