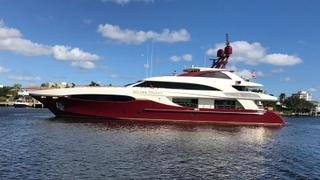 The owner and operator of American charter yacht Golden Touch IIis facing up to $41,456 in penalties after the US Coast Guard discovered the yacht was running an illegal charter operation in Miami.

The Coast Guard boarded the 45 metre Sensation yacht near Nixon Beach over the weekend and identified a number of safety issues.

The yacht, which is equipped to accommodate 12 guests and eight crew members, was found to have 47 people aboard.

The yacht was also found to lack a valid Certificate of Inspection, stability letter and drug and alcohol programme for guests and crew.

Coast Guard chief Captain Ladonn Allen compared the illegal operation to an incident aboard the 29-metre yachtMiami Vice earlier this year, which resulted in the death of a 25-year-old man.

“The unsafe atmospheres that these types of companies and unlicensed captains, who knowingly engage in illegal activity, create on their boats show a complete disregard for passenger safety and have been responsible for multiple deaths in Florida alone,” he added.

“We cannot stress enough to anyone looking to charter a boat to verify the captain’s license and safety of the vessel.”

Golden Touch II was built in the US by Sensation Yachts and delivered in 2006. She completed a 14-month refit last year. Marine Traffic confirms the yacht remains in Miami.