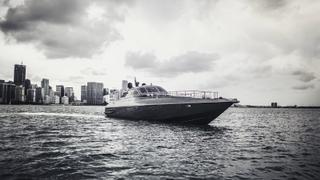 Florida police have launched an investigation after an incident involving the 29 metre yacht Miami Vice resulted in the death of a 25-year-old man on Sunday (April 1).

The victim, named by a Florida Fish and Wildlife Conservation Commission report as Raul Menendez from Hialeah, was in the water at the time and was reportedly struck by the propellers. Two crewmembers are also mentioned in the police report — 20-year-old Mauricio Alvarez and 22-year-old Andres Tarcisio, both from Miami.

It is not clear whether Menendez jumped or fell off the yacht before the fatal superyacht disaster occurred, but it is understood that Miami Vice had run aground near Monument Island and the crew were trying to refloat her.

No charges have been levelled as yet and the authorities have ruled out alcohol as a contributing factor, however the yacht has been impounded at the coastguard base in Miami Beach for the duration of the investigation.

Built in 1998 by Intermarine, Miami Vice had been offered as a high-speed charter vessel with a top speed of 55 knots and a 5,000W sound system. According to the yacht’s charter company MiamiVice.Biz, which was founded last year, she can accommodate up to 12 guests on day cruises and up to seven guests overnight.