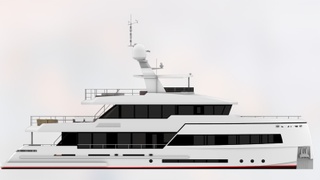 Brazilian yard Inace has signed a new contract for a 27.4 metre expedition superyacht for a Brazilian owner.

Designer Fernando de Almeida joined forces with the yard to announce the contract at the Rio Boat Show.

The FHI 90 yacht was signed for late last year, with the client introduced by the yard’s national dealer, Yacht Collection. Featuring in-house naval architecture, the yacht is due to be delivered by the end of 2020.

The fully customisable yacht will have a beam of 7.15 metres and become part of the yard’s displacement series, which also includes the FHI 115 and FHI 131, which all sport plumb bows.

Inace said the signing of the modern explorer yacht “marks a new phase” in the life of the shipyard, which has been traditionally known for building military and commercial ships.

The news comes after the yard released more details about its FHI 115 yacht concept, which was also developed in collaboration with designer Fernando De Almeida.