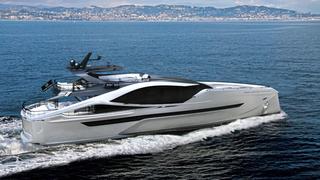 The new 35m yacht boasts an efficient hull form that maximises living space. The design is reminiscent of the US builder’s Super Sport 48m, with sponsons – for extra stability, reduced roll and increased beam aft – and a muscular superstructure. The 48 Super Sport was announced at last year's show; the 48's hull and superstructure is complete and she on track to be delivered in 2013.

‘The most important feature of the 35m design is the efficient hull form, whilst still having the natural stability of the sponsons,’ says Berkeley March, a designer at Palmer Johnson. ‘This has enabled us to use very small and compact engines, namely the Volvo IPS drives, which in turn leads to a more compact engine room, thus greater accommodation space on the lower deck but at the same time keeping the number of cabins as per a typical yacht of her size and maintaining a sleek, low-profile boat.’

The new design has a radically different layout to the 48 Super Sport, with the owners' suite on the lower deck rather than the main deck. It also maximises the beach club space with a fold-down swim platform, while sunken seating on the foredeck gives the yacht another living area. The main aft deck has a beam of just under nine metres, with exposed sides under the haunches creating an unusually open feeling to the space.

‘Traditional layouts for yachts of this size tend to maximise the living space by pushing the furniture outboard and building it in,’ says March. ‘Palmer Johnson, on the other hand, look to have the furniture inboard so we can have the large unobstructed views, creating a fresh approach to onboard living.’

The 35m Carbon Sport design accommodates 10 guests (plus additional accommodation with two pullman berths) and five crew members. It would carry a five metre tender plus two Jet Skis and offer storage for loose beach club furniture. Volvo IPS 1,050 or IPS 1,200 engines are expected to yield a top speed of 30 knots and a range of 1,600 nautical miles at 16 knots.