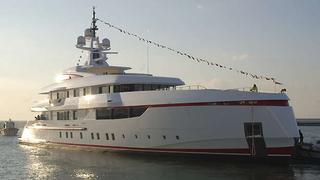 This was the fourth launch for the Ancona, Italy-based yard in 2014, and maybe one of the most exciting projects built in Italy in recent years.

In the words of her designer, Argentinian naval architect Horacio Bozzo, ‘The project stems from a virtuous circle as all parts involved contributed with their best skills and proactive attitude.’

The inspiring story behind this project can be traced to the yacht's visionary owner, Fernando Nicholson, a renowned broker moved by a great passion for yachting, and Horacio Bozzo, a naval architect with a penchant for yacht design. Their first challenge was to find a shipyard capable of building a fully customised yacht to the standards they required. When I asked whether the price influenced the choice, Nicholson says that the build price had little influence on their decision. ‘I worked with ISA on other projects with great satisfaction, they are trustworthy and have a positive approach,’ Nicholson says.

Forever One features a naval platform developed by Horacio Bozzo/Axis Group Yacht Design and ISA’s in-house technical department, with an overall length of 54.65 metre, a beam of 11.10 metre, and – thanks to twin Caterpillar 3512C – she will reach a top speed of 16 knots and a range of 4,200nm at 12 knots.

The yacht's bold exterior lines are enhanced by a reverse, rounded bow and imposing superstructure. Generous interior and exterior spaces are spread on all decks with the owners private apartment on the upper deck. The contemporary interiors bring the signature of Studio Massari. Among the yacht's notable features are her fold-down balconies, and a large window in the transom floods the beach club lounging area flooded with natural light and allows guests to enjoy sea views also while underway.

And as for the yacht’s name, her owner explains that he dedicated Forever One to his wife, because, ‘She is the one, forever.’