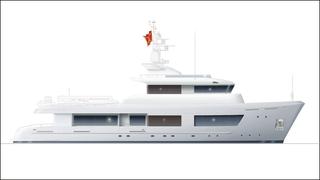 Ivan Erdevicki has designed the proposed conversion of a 38m trawler vessel into a superyacht, at the request of an unnamed shipyard.

The Vancouver-based designer was asked to soften, modernise and simplify the utilitarian looks of the 10-year-old steel ship, while making minimal changes to the design of the hull and accommodation.

Erdevicki has given the exterior styling a more curvaceous look, smoothing over stark angles, and rounding and enlarging the pilothouse windows. The exhaust stack and mast have also been revamped. The upper deck aft is now designed to carry two tenders, a dinghy and two jet-skis, to be deployed by a hydraulic crane stowed on the deck.

Edits that signal the new lifestyle onboard include the addition of panoramic windows and grills in the main and upper decks, as well as enlarging six of the original lower deck ports into ovals to increase natural light below deck. The 38m explorer yacht has an 8.53m beam and will accommodate 10 guests in a master suite and four double cabins, one with a Pullman berth. A crew of seven would sleep in four cabins. The yacht is expected to have a range of the range of 4,000 nautical miles at a cruising speed of 12 knots.