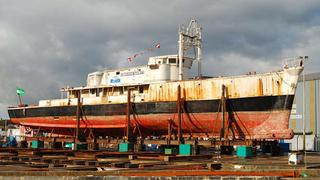 The 43m research vessel Calypso, formerly owned by Jacques Cousteau, has fallen into disrepair amid a legal wrangle between the owners and a repair yard where she was meant to be refit.

The fate of the iconic ship is now unknown after the Cousteau Society, which owns the 1942 former US navy minesweeper, lost a court case against the Piriou Shipyard in France, where she was being kept, and has been ordered to move Calypso to another site. The society must move the boat by 9 February and must pay Piriou compensation of €2,580 per month from September 2013 until her removal from the site. It must also pay an outstanding balance of €273,000 to the yard.

Calypso has been at shipbuilding, repair and engineering yard Piriou, in Concarneau in Brittany, since 2007, for an extensive repair project following her sinking in Singapore in 1996. The work was halted in 2009 as a war of words broke out between the society and the yard, the society claiming mistakes had been made and alleging poor workmanship, the yard saying the commission had been changed significantly mid-project.

Cousteau used the boat since 1950. The diver and marine conservationist, who led the development of the first Aqua-Lung and published many books including The Silent World, which was published in 1953. He died in 1997 in Paris aged 87. In 2012, the French Maritime and River Heritage Foundation made Calypso a Boat of Heritage Interest (Bateaux d’Intérêt Patrimoniaux).