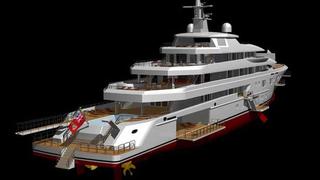 Jens Cruse has taken the trend for hatches to a new level with his 90m design nicknamed Open & Close.

The German designer, who has worked for more than 16 years as subcontractor for Blohm & Voss Naval, was commissioned to create the design by a shipyard whose name he is unable to reveal. It contains an unusual number of hatches, both as access points for equipment and extensions of living space.

‘It is a fashion to have more hatches, as part of having a more inside-outside feeling,’ says Cruse.

Indeed, the 90m features a number of non-permanent inside-outside areas. Forward of the transom platform (which has a hatch for crew access from inside) there is a fold-out bathing platform of about 12m squared to starboard. Much further forward, VIP cabins on both sides feature fold-down balconies. Even the bow contains two fold-down wing stations ‘for guests to watch dolphins’ or, more often, to help the crew throw ropes.

And Cruse uses hatches for other practical functions. Midway down the yacht, to starboard, is a platform for boat arrivals and a gangway – both of which fold out from the boat. In a similar position on the port side is a hatch for crew access. One foredeck hatch contains water toys, a second is a garage for the 6.7m rescue boat, and aft of the boat on the port side another hatch garage contains a 10m and a 12m tender.

The use of foldable, rather than permanent balconies and hatches also benefits the line of the boat.

‘For me these are very straight, clear lines,’ says Cruse, ‘no gimmicks.’

The yacht is designed to be just below 3000 GT, has a beam of 14.35m and a draught of 3.80m. Other features include two swimming pools, two spa pools, a helicopter pad and a cinema.