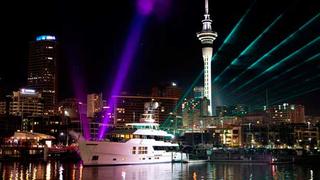 The 45-metre explorer Big Fish will arrive at Butler’s Wharf in central London tonight, where she will be moored until Wednesday to attract prospective buyers.

The superyacht, which is making her virgin circumnavigation of the globe, will then travel to Monaco, where she is expected to be a must-see exhibit at the forthcoming Yacht Show. After her appearance she will continue on to the Caribbean, where she will be available for charter from December.

Big Fish was built last year for Hong Kong-based businessman Richard Beattie, who wanted a yacht in which he could explore remote parts of the world, but which was also contemporary in style, with wide open spaces, plenty of natural light and floor-to-ceiling windows.

When he couldn’t find a yacht for sale that met his requirements, Beattie commissioned Canadian Greg Marshall with the design. His concept, which incorporated the styling and capabilities that Beattie sought, was built at the McMullen & Wing yard in Auckland.