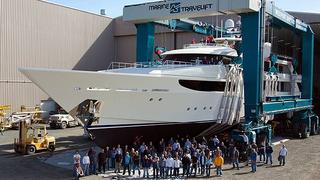 Launch of the 11th Westport 164 superyacht

Westport announces the launch of its 11th hull in the successful Westport 164 superyacht series. She's the fourth launch for the American yard this year of the 11 launches scheduled in 2013.

Currently known under the hull number 5011, she’s part of this 50-metre semi-custom series designed by Donald Starkey with naval architecture by the duo of Garden/Olson.

In the standard version, the Westport 164 accommodates 12 guests in six cabins: a master suite on the main deck, a VIP on the bridge deck and two doubles and two twins on the lower deck. Powered by twin 3,650hp MTU engines, she achieves a top speed of 24 knots, a cruising speed of 20 knots and a range of 5,200 nautical miles at 12 knots.

Phil Purcell, Vice President of Westport, concluded: 'We are very proud to be delivering this 50-metre to a client that owned a previous Westport build'.