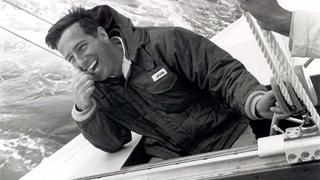 Born in Beverly, Massachusetts, in 1927, Hood grew up in the nearby towns of Danvers and Marblehead. He attended Marblehead High School and Wentworth Institute and served in the US Navy during World War II.

In 1955, he founded Hood Sailmakers in the back of Maddie's Bar in Marblehead, but later moved the operation to the nearby Little Harbor section of the town. With his father's help, Hood was the first sailmaker to weave his own sailcloth, revolutionizing the process to enhance the strength and durability of his sails. By the 1970s, Hood Sailmakers had grown into a worldwide network of service and production lofts, with his sails ubiquitous on winning racing yachts, including all the America's Cup winners from 1958 to 1977.

The talented sailmaker also founded Hood Yachts Systems, which built spars and custom tear-dropped shaped rigging and invented ground-breaking marine hardware including the Gemini grooved headstay for racing, and the Seafurl and the Stoway Mast roller reefing systems for cruising. These contributions made sailing safer and easier for thousands of sailors around the world.

By the early 1980's, Hood had turned his attention away from sailmaking to boatbuilding and design. He created a line of sailboats under the 'Little Harbor' name, and constructed many yachts under that name from 38' to 78', personally involved with design and construction details. In addition, various builders worldwide built more than 1,500 yachts to his designs, including the 133' Anakena.

Hood was a member of the Corinthian, Eastern and Boston Yacht Clubs in Marblehead, the New York Yacht Club, the Cruising Club of America, Storm Trysail Club and Blue Water Sailing Club. He was named Yachtsman of the Year in 1974, and was elected to the America’s Cup Hall of Fame and the National Sailing Hall of Fame.

According to his children, he was marking up drawings right into his last days. All who knew him were inspired by his innovative mind, entrepreneurial spirit and creative passion.