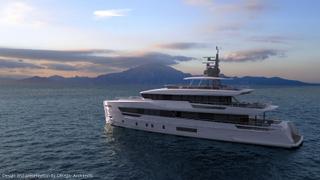 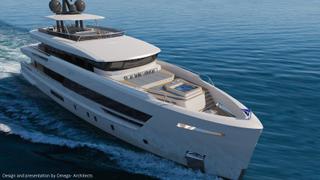 At an event in Italy on July 18, the yard revealed the concept which has been designed in collaboration with Omega Architects and Van Oossanen Naval Architects. The initials of each company have been merged to create the ‘LOV’ name.

Its exterior design has been described as “masculine”, with a near vertical bow and forward inclined wheelhouse. Full height windows wrap around the sky lounge and saloon, allowing natural light into interior spaces.

The yacht includes a number of customisation options and features three design layouts for either eight, 10 or 12 guests across four, five or six cabins. All options include numerous and flexible alfresco relaxation options and an aft lower deck activity centre housing the tender, Jet Skis, diving gear and a day head. The sundeck is customisable with a Jacuzzi or can be used instead to maximise space to include sun beds.

The spacious sky lounge can also be customised to include a games table and service counter, or the potential owner can do away with it completely and replace it with an owner’s deck and a private terrace. This would be in addition to the owner’s suite on the main deck which features an office, vanity room and dressing room as well as his and her bathrooms and a large balcony to port.

Two double and two twin guest cabins will sit on the lower deck. Alternatively, the potential owner can swap the two twins for one full beam VIP suite with an en suite bathroom.

On the wheelhouse deck, each configuration is equipped with spacious lounge areas with sofas and sun pads for private relaxation and sunbathing.

President of Lynx Yachts, Slim Bouricha, said, “Beautifully styled by Omega with elegant lines and refined interiors, the LOV series will be crafted by Lynx Yachts to the highest standards engineered by Van Oossanen.”