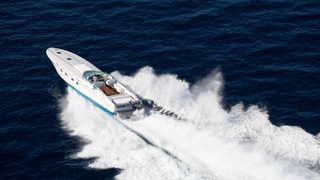 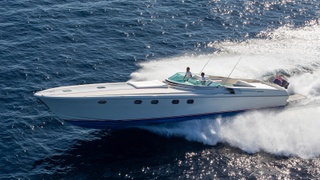 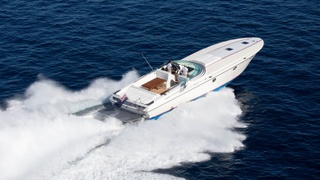 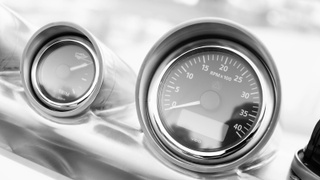 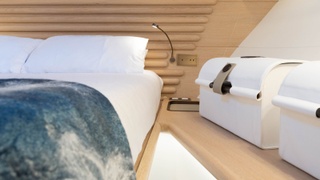 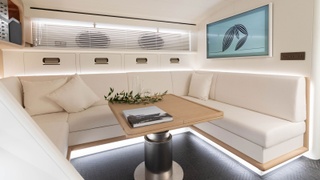 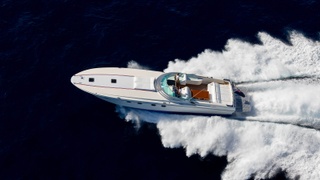 After an extensive refit at the Perini Navi shipyard, Andrew Johansson almost reaches 50 knots on board the Vripack-designed Magnum 60 Furia.

Just as supercars like the Lamborghini Aventador and Ferrari F40 were pin-ups for automotive buffs in the 1980s, Magnum Marine speedboats got pulses racing in the marine sphere. So when the opportunity arose for one owner to acquire a 2002-built Magnum 60 Furia – promoted as the “fastest yacht of this size in the world” by the Florida-based builder – it was too tempting to resist.

“We were in the market for a bigger boat,” the owner says. “I looked for something new but didn’t find anything that I was ready to go ahead with, which is why we restored this.” Named Hammer, the boat has now completed a year-long refit at Perini Navi. The thick fibreglass boat was gutted and restored but with a fresh new design, making this 18.3-metre a highly individual creation.

Moored in Cogolin marina, it will be used regularly as the owner spends four months of the year in nearby Saint-Tropez. It adds to his fleet of boats based in Europe and America, which includes 18.3-metre sailing boat Spectre and 25.5-metre classic Kizbel. Hammer is the second Magnum to have been revived by the owner, after a 13.4-metre 44 Banzai.

“As a kid, I always loved boats and thought I’d like to have a Magnum. I think the brand is great and the Magnum 60 is the most seaworthy boat in a big sea because of its hull shape: it is incredible. Only eight or nine Furia were made I think, and it was a boat I felt I could get my teeth into and redesign.”

And that is exactly what he did together with the creative minds at Vripack. The Dutch studio was introduced to the owner by an industry friend, who found the speedboat sitting unloved in Sardinia. “It was in a bad state when the owner bought it,” says Harry Esson, who manages the owner’s fleet of boats in Europe and is captain of Spectre. “There was some delamination in the hull, luckily all outer skin though. Suffice to say no money had been spent on it and a large section of the under hull had to be ground back and repaired.”

On our test day, the twin MTU 16V 2000 engines come alive as we pick up speed. In its heyday, this boat would have achieved 55-plus knots, however we manage 41 knots on the day from the 1,800hp (1,342kW) rated engines. That said, I’m told that Hammer has reached higher speeds since the restoration. While studies are under way to see how performance can be improved, including the possible replacement of the engines, a faster boat isn’t necessarily the aim. “The speed I achieved before we restored the boat was 53 knots and I think we’ve been 48 knots on it now but I wouldn’t travel more than the late 30s anyway,” the owner says.

“I achieved 49 knots once since the restoration,” says captain Pierre-Yves Hemard as we create a pleasing rooster tail, “but I don’t try any more because you can feel the strain it puts on the engines to get there. But as you can see, it is very easy to reach 40 knots.”

I can’t help but think about Miami Vice and the TV shows like it that made this type of boat famous. “It really is amazing compared to the other boats I’ve been on,” continues Hemard. “With Hammer you really don’t need to be too concerned about the wind or swell. If the owner wants me to go out with 25 knots of wind, I don’t mind because I know the boat can handle it.”

The new concept for the Magnum 60 is sympathetic to the original design but is far more pleasing to the eye, with distinctive detailing throughout – from lighting features within the engine bay and around the boat to elegant storage solutions, finishes and artwork. “We wanted to create an American style from the 1950s, a Palm Beach and Miami styling,” says the owner. “As we are sailors at heart, we wanted to have a light colour relationship with Spectre, which is a similar shade of off-white, and that was the general theme.”

Marnix Hoekstra, from Vripack, says that an important part of the design process was to get on board the boat before works began, “to get an idea of what worked and what didn’t, and to document the existing design”. The Dutchman reveals how they kept the general layout and set-up of the boat but improved it where possible, such as widening the companionway from the saloon amidships to the twin and double cabins forward. They also added a dayhead so guests don’t need to access private areas. “The fixtures and furnishings were all changed and I was keen to make it a sustainable interior by reusing a lot of the same wood from the boat and painting it matt white,” says Hoekstra. “Contrast is added with hand-whitewashed European oak. A lot of detail went into this project to achieve the look you see today.”

Thanks to this owner and team, this Magnum 60 Furia will live on for many years. And with a healthy fleet to play with, it seems likely there will be more projects to come.

Back to the drawing board

The Magnum 60 Furia was launched in 2001, designed by Magnum Marine’s CEO Katrin Theodoli. It is said to be the most successful of the Magnum models. The opportunity to breathe new life into a Furia was an exciting proposal for the designers at Vripack. So how does a design studio go about conceiving a new look for such an iconic speedboat?

“These are the boats you fall in love with when you start drawing; they’re the powerboats of my childhood,” explains Marnix Hoekstra of Vripack. “We started the process by collating images and details for inspiration, and as the ideas began to flow it quickly became obvious that we were on the same page as the owners about the vision for the project.” The result is a re-energised design that meets the owner’s brief with strong detailing and lighting design to cater for any time of day.

Attila: Inside the 64 Metre Sanlorenzo Superyacht