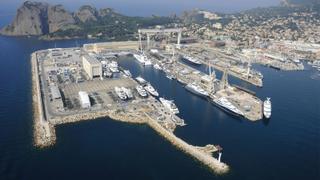 Barcelona-based superyacht refit yard MB92 announced at the Monaco Yacht Show yesterday (September 27) that is has acquired a majority share of Compositeworks.

The deal, which is in line with French protocol, will be completed before the end of the year and will see the existing Compositeworks management team retained.

Ben Mennem, president and co-founder of Compositeworks, said: “I strongly believe that this arrangement provides a platform from which the two companies can lead this growing industry.”

Founded in 1998, Compositeworks is based in La Ciotat but last year expanded to a new facility in La Rochelle, formerly known as the Atlantic Refit Centre.

Pepe Garcia-Aubert, managing director of MB92, added: “We have been looking to expand our operations outside of Barcelona and Compositeworks represents the ideal partner to strengthen our policy of excellence and efficiency of service.”

The news comes one year after MB92 announced an agreement with Blohm+Voss to operate the German yard's new dry dock at La Ciotat.

Recent superyacht refits completed by Compositeworks include Project 49er, which saw a 42 metre motor yacht extended by seven metres, while MB92 made headlines earlier this year with its major overhaul of the 65.17 metre Lürssen superyacht Polar Star, working in collaboration with FM Architettura d’Interni.