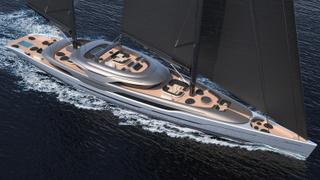 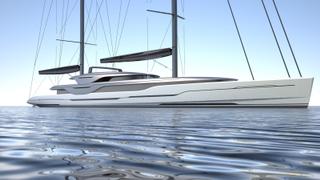 The original design team behind Mirabella V have joined forces on a 93 metre performance ketch design. Rob Doyle Design naval architecture and Van Geest Design have teamed up on the project, which prioritises a family friendly deck layout and simpler sail plan.

There are no winches, blocs or sheet handling. Instead, sailing has become automated through a built-in system in the yacht to leave the forward and aft decks free for large social gatherings.

The sky deck offers 360 degree visibility while the exterior lines have been inspired by “sandy sea beds and water ripples”. The portholes have been integrated into a distinctive hull stripe, which undulates along the side of the yacht.

Lighting features prominently in the yacht’s architecture, and is present throughout the rigging, which “creates an open sky atmosphere”, according to Van Geest Design.

There is also beach access from the open transom, a sky deck located in the piloting area and a sea water pool and tub. The interiors meanwhile are fully customisable and have been described by the design duo as a “blank canvas”.